Boy, did this question start a fierce discussion amongst my kindergarten through fourth graders one day during class.

I was teaching them to lay the napkin to the left of the plate, just as I had been taught during my training at The American School of Protocol.One little boy, politely raised his hand and said his mom taught him to put his napkin in the chair. I told him that was fine and this was another option.I thought about it for a moment and remembered I put my napkin in both places when growing up.

When I got home, I quickly Googled how others handled this topic. It was evenly split for both cases.

Some did not want a used napkin back on the tablecloth while food was being served. Others did not want to put their napkin where others had been sitting. Then some were concerned that a dirty napkin might soil their chairs, and I quickly agreed with that point as I thought of my own cream chairs in my dining room.

So, even if you have placed your napkin in different places at the table, the correct placement of your napkin should be on the left-hand side of your plate. Period. 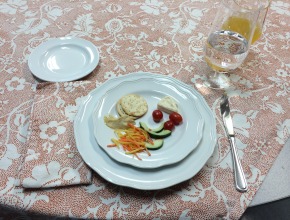